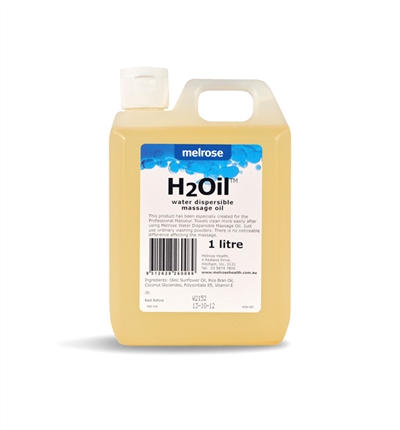 There are many different types of massage oils available; we sometimes get asked which massage oil or massage cream is best? here are our five top choices amongst massage therapists

Melrose was first in Australia, and maybe the world, to develop the water dispersible concept that has become the most popular massage oil type. Water dispersible oils are popular because they not only increase the life of towels considerably, but also reduce the possibility of towels catching fire in the dryer.

You can test the dispersibility of H2Oil® by adding a few drops to a glass of warm water and shake - it will turn white - it emulsifies the oil. Adding normal washing powder to the wash removes the massage oil from the towel.

It is slightly oily, which allows hands to glide easily over skin. Sweet almond oil is absorbed fairly quickly, but not so quickly that you need to keep reapplying it.

Melrose Sweet almond oil is a classic base oil for many therapists, it contains 100% Sweet Almond oil. It is Non allergenic so it usually does not irritate skin. However people with nut allergies are probably best advised to avoid using almond oil, or to try a patch test first.

Comes in the unique Melrose cask that keeps the oil fresh to the last drop.

Apricot kernel oil is similar in texture and color to almond oil, but costs slightly more. It is rich in vitamin E, a quality that gives it a longer shelf life than the typical oil.

The Oil Garden Apricot Kernel Oil has a very light texture makes it very suitable as a facial oil, especially for sensitive, inflamed, dry or mature skin. Deeply nourishing and a useful source of Vitamin A and essential fatty acids.

Although you may think of coconut oil as a white solid oil, however when warmed coconut oil is actually a light, non-greasy, liquid oil.

Melrose makes an organic and Unrefined Coconut Oil, This pure unrefined coconut retains all the aroma of coconut. A solid at temperatures below 20C, warmed it is a clear high glide oil with great stability.

Jojoba is actually a wax extracted from the seed of the jojoba plant. Jojoba is a good option for most people prone to back acne because it is thought to have antibacterial properties

Jojoba has a very long shelf life, so it's a good choice if you don't use it regularly. It is very well-absorbed, which makes it a favorite carrier oil for aromatherapy. Jojoba is usually not irritating to skin.

Other Massage Oils include

Avocado Oil
Avocado oil is pressed from the avocado fruit. Deep green in color, avocado oil is a heavier oil and is usually mixed with lighter massage oils such as sweet almond oil. People who are sensitive to latex may be sensitive to avocado oil so we recommend to try a patch test or do not use.

Cocoa Butter
Cocoa butter is very rich and has a distinct chocolate aroma. It is solid at room temperature and has a heavy texture, so it needs to be blended with other oils or used only for very small areas. Most often this ingredient is used in balms and ointments blended with waxes for a massage balm which requires a bit more grip

Grapeseed Oil
In many respects, grapeseed oil makes a great massage oil. It has little-to-no odor, and it has a smooth, silky texture without being greasy.

However, most grapeseed oil is extracted from grape seeds using a solvent (rather than being pressed from the seeds), which some aromatherapists say make it an inferior oil for aromatherapy massage.

Olive Oil
Most people are familiar with olive oil as a cooking oil, but it is occasionally used for massage. It is a heavy oil with a greasy or sticky texture and recognizable aroma that many associate with cooking, so it's usually not used on its own for massage.

Sesame Oil
Sesame oil is a rather thick oil that may leave skin feeling oily, so it can be blended with lighter massage oils. The unrefined oil has a strong aroma.

Shea Butter
Extracted from the seeds of a tree native to Africa, shea butter is a solid at room temperature. Like cocoa butter, shea butter is heavy and can leave an oily feeling on skin, so it is usually not used on its own for massage. It may be blended or used for very small areas. Most often this is used in balms and ointments. Shea contains a natural latex, so people with latex allergies should do a patch test before using it.

Note: Sometimes instead of massage oil, massage therapists may use specially-formulated massage gels and massage lotions and massage balms depending upon the style of massage, i.e. deep tissue, and whether they are after more grip or glide from the massage oil

Massage therapists might also use essential oils to create their own special massage blend. The Oil Garden have created a few off the shelf blends listed under essential oils and romance oils

We also recommend blended creams such as the Fisiocrem Solugel, Natural Solution for Muscle and Joint Pain and the Premax range